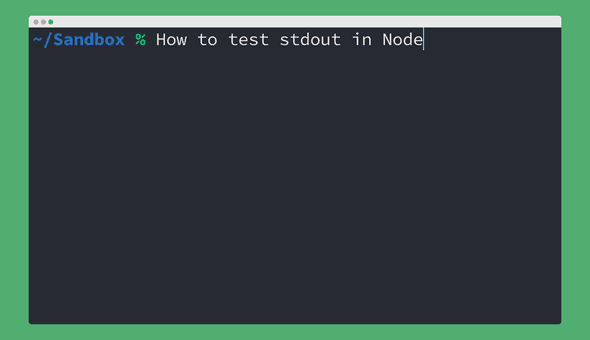 It took me a day, but thanks to my colleague James Ransome for suggesting the use of Node’s child_process for this, it was fairly easy in the end!

I wanted to test Pino’s output to stdout

Sidenote: I know this counts as testing implementation details of a dependency, but in this case I was working on a custom logger library that wrapped around Pino and did a few additional things. Pino decided to introduce breaking changes in v6.x.x where logging strings and objects like logger.info(string, object) wouldn’t work as expected (they would ignore the second parameter)

The test case essentially was the following:

Once we were able to access the output, we’d be able to JSON.parse() it, and assert against the value of msg in the example above.

The solution was to spawn a child process in node, then listen to the EventEmitter on.(‘data’) event to do our assertion.

Create a file that uses the logger, or whatever code you want to test that logs to stdout.

Quick explanation of what’s going on in the test above

Things that we tried that didn’t work 🙅

Initially, we were trying to use the EventEmitter’s .on('data', (callback) => {}) directly without spawning a child process. I’m still quite new to child_process so I’m not sure why this doesn’t work.

Another thing I tried that didn’t work was spying on stdout using Jest. Luckily, I found this recent Jest issue that hinted that this wouldn’t work because of how Jest was written.

Hope this helps you in some way!

The code for this site is available for free under an MIT license.